From Zelda Dungeon Wiki
Jump to navigation Jump to search
Want an adless experience? Log in or Create an account.
Ruvo Korbah Shrine 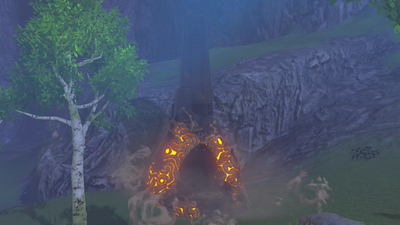 The Ruvo Korbah Shrine, also known as A Major Test of Strength+, is one of the many Shrine of Trials from Breath of the Wild.

This shrine is located south of the Temple of Time, and is accessed during the Divine Beast Tamer's Trial, as a part of The Champions' Ballad DLC pack as part of the One-Hit Obliterator Trial.

This Shrine is only accessible after returning to the Shrine of Resurrection and obtaining the One-Hit Obliterator. This weapon is used exclusively during this Shrine, and is the only weapon Link has during the quest.

The aim here is to defeat all the enemies in the surrounding area. Use the One-Hit Obliterator on the more difficult enemies. Watch out for spikes too.

Be wary though that the gulley on the way from the Ancient Abbey will have Bokoblins dropping a few boulders.

A Major Test of Strength+

This Shrine starts just like any other Test of Strength, with a Guardian Scout IV being present to fight. Use your shield to block any laser shots and wait for an opening to take him out with the One-Hit Obliterator.

You can also use Stasis or an Ice Arrow right off the start to get enough time to run up and hit the Scout.

After he is defeated, head through the now-open gate to find a chest. Open it for 10 Bomb Arrows. Step on the switch behind it to lower the floor in the main room.

Once you arrive at the basement you'll see a locked door. As we can't do anything about this now, head left through these linear corridors, taking out any Guardian Scouts as you go. They only have 13 HP so one shot with a decent bow will eliminate them.

Watch out for the Guardian Scout III in this section: it has 1500 HP so hold up your shield, wait for an opening, and take him out with the One-Hit Obliterator. If you're careful, as you come up the ramp, you can hit the Scout III with Stasis and have enough time to run up and hit it.

Continue on and eventually you'll come across a room with a ladder. As you enter this room, take a left and you'll see another corridor next to the one you came from. Follow it to find a chest, it contains a Giant Ancient Core.

Head back to the ladder room and this time climb it. Cross the platform to find another chest, containing a Small Key.

Now, navigate your way back to the locked door and head through it. You'll be in an open room which has a few Guardian Scouts.

Use Cryonis to make a pillar of ice which will block the scout on the ledge above. Stand hidden from it, then take out the other scouts with your bow, or paraglide down to them to take them down with your weapon.

Head up a staircase behind where your fought the weaker scout, whilst avoiding the scout's laser shots by holding up your shield or darting behind a gate.

As you reach the top platform, continue to hold out your shield then get up close. Wait for an opening, then take it out using the One-Hit Obliterator. Or wait just below its line of sight under the stairs, prep stasis then freeze it as soon as you come into view.

Once all the scouts are taken down, the gate will open to the Sheikah Monk. Speak with them to obtain a Spirit Orb.