From Zelda Dungeon Wiki
Jump to navigation Jump to search
Want an adless experience? Log in or Create an account.
Muwo Jeem Shrine 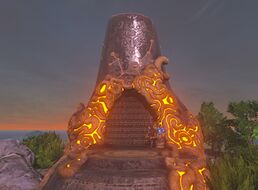 The Muwo Jeem Shrine is one of the many Shrine of Trials found in Breath of the Wild.

Muwo Jeem Shrine is located atop Cape Cales overlooking the Necluda Sea. Albeit the shrine can be easily spotted from any of the beaches of Hateno to its north, the shrine is not part of the Hateno Tower region, but rather the Faron Tower region.

The shrine can be reached by reaching the top of the cape from the Dunsel Plateau, though it's more easily accessible from the west in Faron, as well as Lurelin Village, as attempting to reach it from Hateno may involve climbing. Mid-way through the cape there's a Skull Encampment that contains several Bokoblins.

The shrine's travel gate provides a great vantage point to reach both Tenoko Island and Eventide Island, as well as Soka Point to the south.

The cape, as well as the area surrounding the shrine may feature some Water Buffalo, which roam frequently there.

The Muwo Jeem Shrine is one of six shrines that are A Modest Test of Strength. There is a Guardian Scout III and after it is defeated, Link can open a chest that contains a Royal Bow or Knight's Bow. Link can then speak with Muwo Jeem at the altar to get a Spirit Orb.