From Zelda Dungeon Wiki
Jump to navigation Jump to search
Want an adless experience? Log in or Create an account.
Hawa Koth Shrine 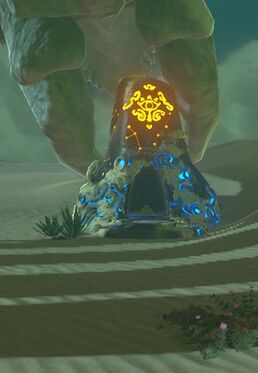 Hawa Koth Shrine, also known as The Current Solution, is one of the many Shrine of Trials from Breath of the Wild.

Hawa Koth Shrine is one of the most difficult shrines to reach, as the region surrounding it is plagued by sandstorms that impede the function of the Sheikah Slate's map. Aside from that, aiming for the shrine without Lv. II heat resistance will produce heat damage on Link.

Whereas Link can be aimed to run southwest from outside the sandstorms, he can stumble upon a skull Bokoblin encampment nearby.

The shrine is immediately next to Great Fairy Tera's fountain, this being the fountain closest to shrine out of all Fairy Fountains in the game. However, out of those, it's the least central in the map.