From Zelda Dungeon Wiki
Jump to navigation Jump to search
Want an adless experience? Log in or Create an account.
Suma Sahma Shrine 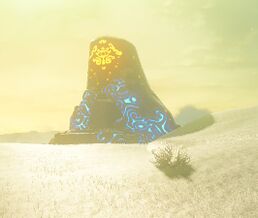 Suma Sahma Shrine is one of the many Shrine of Trials from Breath of the Wild.

The cabin at the south end of Mount Granajh has a book on a rock. Read the Mountain Peak Log to begin the Secret of the Snowy Peaks shrine quest.

Directly to the south of the book is a pedestal on a wall of the Daval Peak. The objective is to cast the shadow of one of the nearby snowballs so that the shadow of one of the snowballs is exactly in that small circle in the middle of the platform. The pedestal will shine orange at 4 pm and Link can successfully hold the snowball so the shadow covers the center of the pedestal between 4:00 and 4:30 pm. This will cause the nearby Suma Sahma Shrine to appear, completing the quest.

The trick to completing this is a larger snowball, by throwing it up the hill a few times and letting it get too big to pick up, then standing next to it with a flame weapon in its sheath (equipped but not held) until the Pick Up prompt shows, then you change weapons and pick it up, making the actual positioning easier. You can also light the fire in the "hut" and it doesn't go out every time you pass time, so you can get the ball ready, kill the enemies, then pass time until noon to save playing time. That said, the campfire does go out after you enter the shrine, and if you leave the area completely.

Alternatively, you can use Cryonis in the puddle in front of the pedestal at the appropriate time and activate the shrine that way.

Alternatively, if you hold a nearby barrel and line up the shadow (stood on the ledge opposite the pedestal) directly into the centre of the pedestal at 4pm you will activate the shrine (faster than dealing with snowballs, just dont break them!)

If you go for the Korok first, there is a larger snowball near that tower, which makes it much easier to start off, just be very wary of the Lizalfos that leaps from under the snow, it can easily lose you the snowball and make you start over.

After all that effort, the shrine itself contains no challenges at all. Simply move forward and open the chest for a Moonlight Scimitar. Examine the altar at the end to speak with Suma Sahma and get the Spirit Orb.