From Zelda Dungeon Wiki
Jump to navigation Jump to search
Want an adless experience? Log in or Create an account.
Ree Dahee Shrine 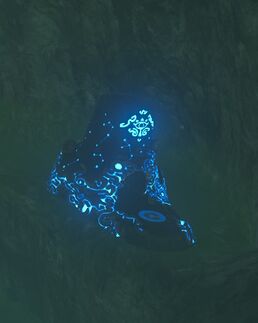 The Ree Dahee Shrine, also known as Timing Is Critical, is one of the many Shrine of Trials from Breath of the Wild.

Stand on the switch and the platform ahead will tilt. The Ancient Orb will roll down and into the slot, causing the platform to activate, allowing Link to ride it further ahead.

Stand on the next switch to get the Ancient Orb rolling. As it picks up speed, step off the switch, so the platform switches to being horizontal. The Ancient Orb will fall down to the lower platform and roll into the hole. If it has too much speed initially, it will fly off the platform.

For the third switch, stand on it, and Ancient Orb will slowly roll down the platform. Just before it is at the very edge, step off of the platform. This will cause the platform to return to normal, launching the Ancient Orb in the air. If it had enough momentum, it will launch in the air, landing in the hole ahead.

Before completing the shrine, there is a single Treasure Chest to reach on the left side and there are multiple ways to reach it. In order to reach it, the floor switch needs to be held down. At the very end of the shrine down below on the right, there are a pair of metallic barrels. Link can use Magnesis to grab these and put them on the higher platform. From there you can take the barrels across the moving platform and sit it on the floor switch. Now when Link rides across the large platform will be stuck in a diagonal fashion. There is a ladder near the ball that Link can use to climb toward the monk.

Alternatively, Link can use one of the orbs from an earlier puzzle to hold the switch down. The last option, Link can step on the switch, uses Stasis on the switch, ride the platform, and quickly run up the diagonal platform before the Stasis ends.

The treasure chest contains the Climber's Bandanna. After collecting the chest, run and speak with the Monk at altar to get the Spirit Orb.