From Zelda Dungeon Wiki
Jump to navigation Jump to search
Want an adless experience? Log in or Create an account.
Dunba Taag Shrine 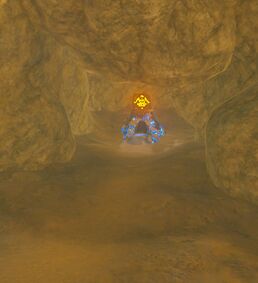 Dunba Taag Shrine is one of the many Shrine of Trials from Breath of the Wild.

Use Stasis on the cogwheel directly ahead when the platform is right side up, with the curved surface facing upwards. This should allow the rolling boulders to hit the switch and open the gate. It may take more than one boulder to fully press the switch in.

In the next area, u-turn around the fence to your left to see a chest behind a gate, 4 barrels, a bottomless pit, and some unsteady blocks across the pit. Move near the blocks and throw bombs at them to knock them down and reveal a switch. The goal here is to use one of the barrels to Stasis-golf and hit the switch hard enough that it will open the gate and you can open the chest. The barrels will continue to replace themselves until you get it or run out of weapons. Alternatively, shoot a bomb arrow at the blocks. The force from the explosion will trigger the switch. The chest here usually contains a Falcon Bow.

Now head to the other side of the fence from the barrels. There's a boulder here, and a slight ramp right before the switch it needs to be on. Push it to the ramp, use Stasis, and hit it with a weapon or some bombs to give it enough force to get on the switch. Head forward to open another chest which usually contains a Great Thunderblade.

Moving to the far end of the big room and you need to Stasis-golf one more time, to launch a barrel at the upright stone slab. You'll need to maximize the force, all the way to red, to have enough force to knock the slab over. Alternatively, you can use Stasis and shoot 1 bomb arrow at the slab towards the top. Another even easier idea is to drop any metallic weapon on the ground and then lift it up with Magnesis. Grab it and put it against the top of the stone slab. Eventually the slab will fall down, pressing the switch. An even easier idea is to lift a metallic weapon with Magnesis to push the button itself.

Run over to the altar and speak with Dunba Taag to get a Spirit Orb.