From Zelda Dungeon Wiki
Jump to navigation Jump to search
Want an adless experience? Log in or Create an account.
Piper Ridge 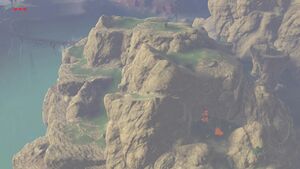 The Piper Ridge is a location in Breath of the Wild.

The Piper Ridge is located just west of the Tabantha Great Bridge and south of the Nero Hill and Tabantha Tower. At the northwest end of the ridge, there is a Great Fairy Fountain where the Great Fairy Kaysa can be found.

At the peak of the ridge, there is a structure with a pinwheel on it. Shoot the balloons to get a Korok Seed. Just northeast of the peak at a slightly lower elevation, there are some Luminous Stone Deposits. There is also a small cave here with two statues and some offering plates. Drop an apple to get the Korok to appear.

Just northwest of Piper Ridge there is an enemy camp, down near the pathway. Here Link will encounter some Blue Bokoblin, Black Bokoblin, a Blue Lizalfos, and a Blue Moblin. There is a treasure chest within the camp that contains a Knight's Claymore. 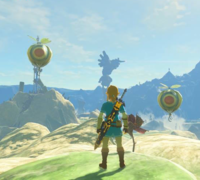 Stand next to the pinwheel and shoot down all five balloon targets.

Stand next to the pinwheel, shoot the balloons side note you can throw bombs at them. 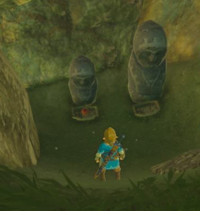 Under the overhang in the cave, fill the remaining bowls with an apple.

Put an Apple in the offering bowl.