From Zelda Dungeon Wiki
Jump to navigation Jump to search
Want an adless experience? Log in or Create an account.
Goma Asaagh Shrine 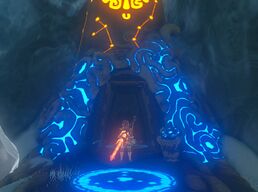 Goma Asaagh Shrine is one of the many Shrine of Trials from Breath of the Wild.

There are some large ice blocks, just southwest of the Hebra Peak. Melt the ice with a Fire Arrow, a fire weapon, or a camp fire to find the shrine. Within the ice, there might be an enemy Black Moblin, as well as a treasure chest that contains a Blizzard Rod. Melt the pedestal to gain access to the shrine.

Alternatively, if you drop in from above, you can access the shrine without melting the ice.

A Major Test of Strength

Defeat the Guardian Scout IV that is inside. The ground is filled with water, so Link can use Cryonis to create ice blocks and climb up to avoid the guardians charge attack. Once defeated the Guardian Scout will drop an Ancient Battle Axe++, a Guardian Spear++, and a Guardian Sword++. Open the treasure chest to find a Royal Claymore. Then run up to the alter and speak with Goma Asaagh to get the Spirit Orb.