From Zelda Dungeon Wiki
Jump to navigation Jump to search
Want an adless experience? Log in or Create an account.
Cape Cales 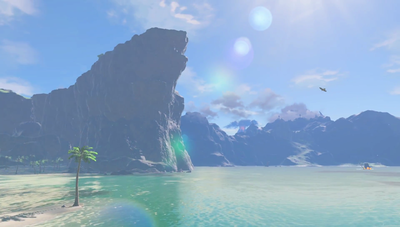 Cape Cales is a location in Breath of the Wild.

Cape Cales is located northeast of Lurelin Village and just east of Mount Dunsel. The cape is home to the Muwo Jeem Shrine, located at its peak point and it overlooks the Necluda Sea to the east. Albeit it's highly visible after leaving Hateno Village to the south, the Cape is not part of the Hateno Tower regional map, but rather, it's part of the Faron Tower map.

There is a heavily guarded Bokoblin camp in the area, with four Red Bokoblin archers standing guarding on watchtowers. Inside the hut there are numerous Blue Bokoblin and Black Bokoblin that will storm out when when the of the lookouts spot Link. If Link defeats all the Bokoblins, a treasure chest can be opened and it contains a Soldier's Spear.

On the cape there are some Mountain Goats and some Water Buffalo roaming around. Near the shrine at the higher elevation there is a rare Hearty Lizard as well as an Energetic Rhino Beetle in the area.

On the side of the cape, just south of the Muwo Jeem Shrine, there is a ledge where there are numerous bird nests that contain a bunch of Bird Eggs. There are also a number of Ore Deposits on this ledge, including a Rare Ore Deposit. 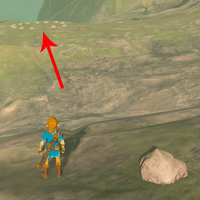 Complete the rock circle. The rock is in the direction of the open gap (west).

Grab the rock to the west and complete the circle. 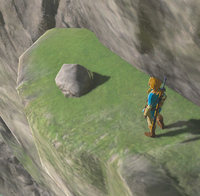 Just below the top of the cliff is a small ledge with a rock. Pick it up.

Pick up the rock on the small ledge nearly to the top of the cliff.