From Zelda Dungeon Wiki
Jump to navigation Jump to search
Want an adless experience? Log in or Create an account.
Twilight Bow 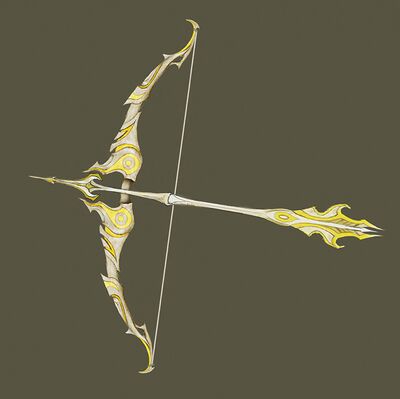 The Twilight Bow is a weapon initially used by Zelda in the climactic battle of Twilight Princess, which is also used by her for high-attack-power special moves in Hyrule Warriors and the Super Smash Bros. series. It is available as an amiibo-exclusive weapon in Breath of the Wild.

Zelda uses the Twilight Bow to fire Light Arrows gifted to her by the Light Spirits when she & Link are on Epona chasing down Ganondorf.

"A bow used by the princess who fought the beasts of twilight alongside the hero. It's said to contain the spirits of light's power. It fires arrows straight and true, as if beams of light."

The Twilight Bow is an amiibo-exclusive weapon. It can be obtained by scanning a Zelda (Super Smash Bros) amiibo, through the use of the amiibo Rune. Scanning the amiibo will drop various items from the sky, along with a treasure chest, which has a chance of containing the Twilight Bow, but can also contain different items. The amiibo can only be scanned once per day.

The bow works identically to the Bow of Light received in the fight with Dark Beast Ganon, but with a base power of 30. It shoots Light Arrows which don't drop in height. This makes it tremendously accurate and durable, but has a mid-range power.

Zelda's Special Attack with her Rapier weapon uses the Twilight Bow to fire a Light Arrow. This affects only enemies in a straight line in front of her.

Zelda's Final Smash in Super Smash Bros. Brawl and Super Smash Bros. for Nintendo 3DS and Wii U, called Light Arrow, has her fire a light arrow from the Twilight Bow. The bow itself is described in the Brawl "Light Arrow (Zelda)" trophy text as "a mighty bow of light with which she can attack from afar".