From Zelda Dungeon Wiki
Jump to navigation Jump to search
Want an adless experience? Log in or Create an account.
Eldin Tower 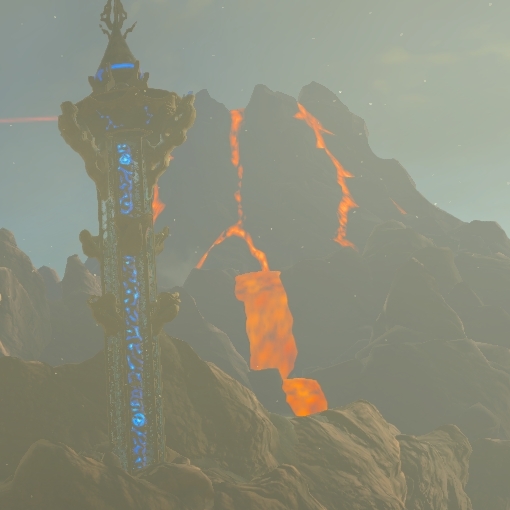 Eldin Tower is a Sheikah Tower within Breath of the Wild. It is located in Eldin, west of the Akkala Tower region and east of Woodland Tower region. It is also the region in which the Gorons reside.

The tower's travel gate faces Southwest, opposite to the road leading to the Southern Mine. The tower itself is separated enough from Death Mountain for Link not to require fire protection to travel to it.

The tower is located in a somewhat rugged landscape that requires scaling. Though close by to the north, the road up Death Mountain should not be accessed or paraglided into without the effects of a Fireproof Elixir or fire-resistant armor, as Link will be set aflame from the hot air.

Contrary to other Sheikah Towers, the Eldin Tower does not provide a particularly good vantage point overlooking Death Mountain or the road to it, and other travel gates are considerably better placed within the area, especially Shae Mo'sah Shrine next to Goron City, and Daqa Koh Shrine next to the Bridge of Eldin. This is due to the fact that the mountain itself and its surroundings almost completely cut off access to the area north of the tower. As such, apart from the obtainment of the regional map, the tower may be seldom used as a result.

Breath of the Wild Sheikah Towers[edit][hide][show]
Retrieved from "https://www.zeldadungeon.net/wiki/index.php?title=Eldin_Tower&oldid=310531"
Category: