"This completely vertical rock stands to the north of Death Mountain. The three Goron Blood Brothers train here to become stronger. By demonstrating his strength by climbing the cliff, Link is recognized as the fourth brother." 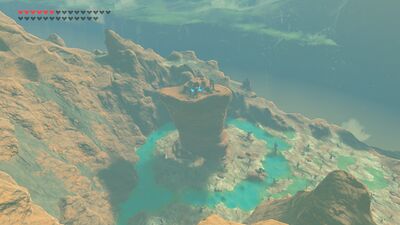 Gut Check Rock is an area in Breath of the Wild. You'll need to pass Bayge's The Gut Check Challenge program to access the shrine. Having a full Climbing Set that has been upgraded twice will help clear the challenge much more easily.

The moat surrounding it acts as a Hot Spring, allowing Link to recover health. 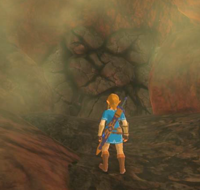 Blow up the rock wall and lift up the small rock that was hidden behind it.

Pick up the rock on the northernmost pillar and move it to the upper edge of the pillar so it matches the rock placement on the other pillars.

Move the rock on the northern pillar slightly uphill.