From Zelda Dungeon Wiki
Jump to navigation Jump to search
Want an adless experience? Log in or Create an account.
Kabetta 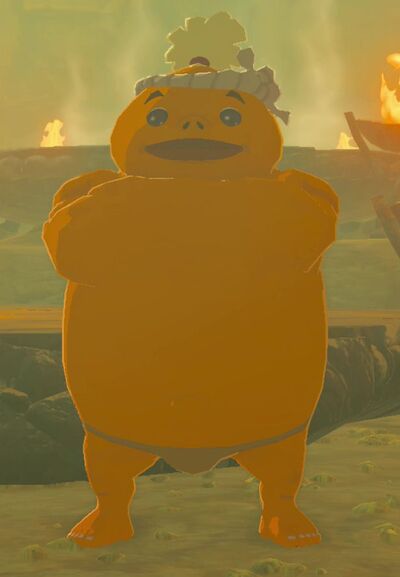 Kabetta is a Goron from Breath of the Wild.

He and his older brothers Heehl and Bayge form the self-proclaimed "Goron Blood Brothers", and the three have abandoned their home in Goron City in favor of increasing their strength and endurance.[1] Kabetta is constantly complaining about the heat, regularly using the phrase so sweaty to describe his current state.[2]

Kabetta appears with his two brothers at Mount Nabooru, where they are standing near some extremely hot plates. This is an ancestral training ground where Goron's have always come to train to become stronger and more powerful.[3][4] Talking to the Gorons will begin the Test of Will shrine quest.

In the first stage, Link will need to drink an Elixir or wear armor that has Heat Resistance. If Link can outlast the Gorons, he will be able to participate in the ultimate endurance. Kabetta describes it as the toughest test known to the Goron kind.[5][6] In the second phase, Link will need to drink an elixir that has Flame Guard, preventing him from overheating. Successfully doing so will gain the approval of all three Gorons and will reveal the Joloo Nah Shrine.[7]