From Zelda Dungeon Wiki
Jump to navigation Jump to search
Want an adless experience? Log in or Create an account.
Mount Nabooru 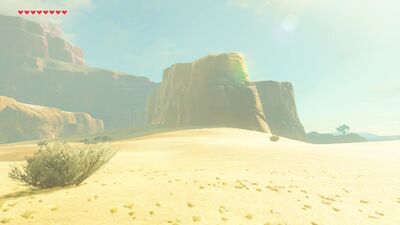 Mount Nabooru is a location on the north-eastern point of the Gerudo province, next to the border with Central Hyrule, in Breath of the Wild.

Mount Nabooru is a high point just west of the Great Plateau. The Gerudo Canyon Pass circles around the mountain as it heads west towards the Gerudo Desert. Despite its name distinction as a mount, it is actually a lower elevation than the majority of other points in the region to the west and north.

One of the main attractions on the mountain is the Stone Talus (Luminous) which will awake when Link walks near it. Southeast of the Stone Talus on the same elevation, right at the edge of the cliff, there is a treasure chest that can be pulled out of the ground that contains a Moonlight Scimitar. A second treasure chest can be found on the east side of the mountain, hidden behind some bombable boulders. The chest here contains an Amber gem.

At the northwest portion of Mount Nabooru, on a lower elevation, Link will find the Goron Blood Brothers. A trio of Gorons that have traveled to the area to train in strength and endurance. Here you can take part in the Test of Will, a shrine quest that will reveal the Joloo Nah Shrine. 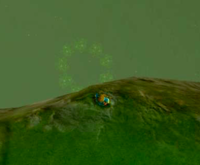 Jump into the circle of lilies down below you in the water. 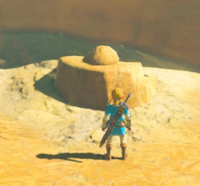