From Zelda Dungeon Wiki
Jump to navigation Jump to search
Want an adless experience? Log in or Create an account.
Bayge 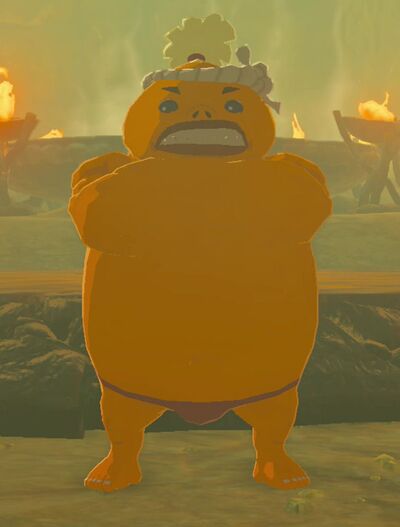 Bayge is a Goron from Breath of the Wild. He and his younger brothers Heehl and Kabetta form the self-proclaimed "Goron Blood Brothers", and the three have abandoned their home in Goron City in favor of increasing their strength and endurance.

If Link ascends Gut Check Rock, he will find Bayge prevents him from accessing Gorae Torr Shrine unless he completes the Goron Blood Brothers' Gut-Check Challenge. If Link successfully manages this, climbing Gut Check Rock unaided while collecting rupees, Bayge will proclaim him to be the fourth Goron Blood Brother and allow him to access the shrine.

Subsequently, they will present him with a harder version, the "Super Gut Check Challenge".

See also: Test of Will

Bayge and his brothers can also be found on Mount Nabooru at the ancestral training ground.[1] Here, Bayge and his brothers will challenge Link to survive through two rounds on red-hot platforms longer than them without the use of heat- or flame-resistant clothing. Bayge notes that the challenge is said to reveal a Shrine.[2] If Link survives both rounds, Bayge is the last to fall.[3][4][5]

Bayge can finally be found at Darb Pond with his brothers, where Daruk was said to have trained as part of his Divine Beast Tamer's Trial. The three will express bewilderment at how Daruk could reach the rings without sinking below the depths. However, by using Magnesis to make a platform under the final ring, Link can reveal Rinu Honika Shrine.