The Battle of Hyrule Field

From Zelda Dungeon Wiki
Jump to navigation Jump to search
Want an adless experience? Log in or Create an account.
The Battle of Hyrule Field 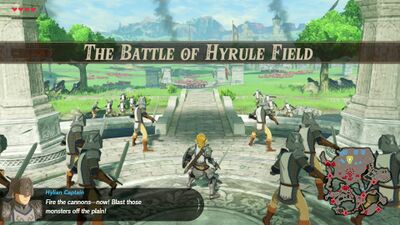 "A great horde of monsters has invaded Hyrule Field. The Hyrulean army has mounted a defense to drive them back"

The Battle of Hyrule Field is the first scenario of Hyrule Warriors: Age of Calamity Chapter 1, and is available in the free demo version.

King Rhoam sends the Hyrulean Army, including Link, to stop an army of Bokoblins, Moblins and Lizalfos.

When Impa arrives from Purah with the Sheikah Slate, it activates a diminutive Guardian, who raises a strange tower and subsequently follows Link as he, Impa and the rest of the army drive the intruders away.

"Since ancient times, Calamity Ganon has threatened the land of Hyrule. As Hyrule Castle falls to his devastating assault, a lone Guardian reacts to Princess Zelda's desperate plea and embarks on a journey through time to save her."

King on the Eve of Battle

"The king of Hyrule, preparing for the revival of Calamity Ganon, attempts to eliminate the monsters running rampant. Standing among the troops assembled for battle is the fateful knight Link."

"The mysterious Guardian that Link discovered during the battle reacts to the Sheikah Slate Impa has in her possession. Just as the Guardian reacts, a mysterious tower erupts from the ground"

"Impa racks her brain over the mysterious, diminutive Guardian and the tower that suddenly appeared. Meanwhile, the Guardian spots Hyrule Castle and, ignoring Impa's shouts, rushes towards it as fast as it can."

"Link and Impa pursue the Guardian, arriving at Hyrule Castle and meeting Zelda. As Zelda expresses her joy at their safe return, the small Guardian dashes up to her, seemingly desperate to convey something."

The Battle of Hyrule Field [text]

"The Sheikah Slate conveyed the little Guardian's purpose. This anomalous visitor had traveled from a future of ruin–a time in the midst of the Calamity–to save Princess Zelda"