"This reef lies at the very end of the road leading out from Hateno Village. The rock pillars out in the water appear in an ancient song, and it is said a treasure cached by an ancient hero for use against the Calamity is stored there. The large number of seagulls that circle overhead makes Kitano Bay quite the spectacle." 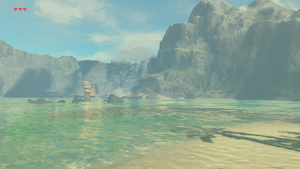 Kitano Bay is a location found in Breath of the Wild.

Kitano Bay is part of the greater Necluda Sea and it located just east of Ebon Mountain and south of the Hateno Ancient Tech Lab. As with most of the coastline of the Necluda Sea, there are Blue Lizalfos swimming around in the water, as well as some Water Octoroks. There are also a few Electric Keese that appear along the coastline.

There are Ironshell Crabs and Razorclaw Crabs on the beach. In the water, there are Armored Porgy and Mighty Porgy that Link can capture.

There are two hidden treasure chests that are underwater, one of which is right near the coastline at the northwest part of the bay and it contains a Silver Rupee. The second contains a Gold Rupee and is part of a sidequest titled The Hero's Cache.

There are a group of large rocks a bit out to sea and at the top of one of the large pillars, Kass can be seen playing his accordion. Link can speak to Kass and he will tell Link that this is rock pillar is the subject of a song and he'd like to play it for Link.[1] The One day I'll return to fight evil. My cache is at 17 of 24, This rock will point towards its retrieval.[2]

The cache was a hidden stash of money left by the ancient year who defeated the Calamity 10,000 years ago.[3] The trick to the solution is knowing that 17 of 24 is a hint in military time. The 17th hour out of a 24-hour day is equivalent to 5pm. From where Kass is standing, face where 5pm would be on a clock, which is south and a bit east. Jump in the water and right behind an underwater rock, there is a treasure chest. Use Magnesis to pull it up and get a Gold Rupee to complete the quest. 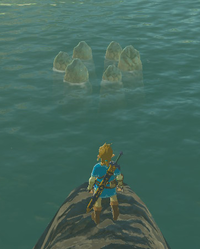 Throw a small rock into the ring of rocks found in the water. Cryonis can make it easier to reach.

Throw a small rock into the ring of boulders in the water. Use Cryonis to get closer so that your throw does not miss.