From Zelda Dungeon Wiki
Jump to navigation Jump to search
Want an adless experience? Log in or Create an account.
Loshlo Harbor 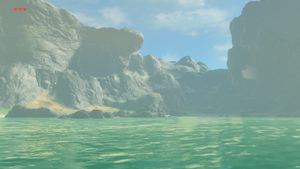 Loshlo Harbor is a location in Breath of the Wild.

The Harbor is a part of the Necluda Sea, located just south of Ebon Mountain and north of Cape Cales. There are a variety of enemies appearing including the occasional Blue Chuchu as well as some Green and Blue Lizalfos. At nighttime Stalkoblin and Stalizalfos will appear, and there are also some Water Octoroks out to sea. At the north end of the beach, there are some Stone Pebblits that will appear. The nearby Lizalfos may pickup a Stone Pebblit as a weapon and toss it towards Link.

There are a few Ironshell Crabs and Razorclaw Crabs that can be seen crawling on the beach. In the water, there are a variety of fish, including Armored Carp, Mighty Carp, and Mighty Porgy.

Just a bit inland to the west, on a much higher elevation, lies the West Loshlo Harbor, where a Red Hinox can be found.