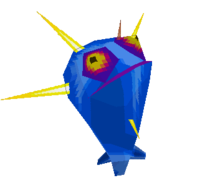 Blue ChuChus are reoccurring enemies in The Legend of Zelda series. They are one of the many variations of the ChuChu family.

This is a blue variation of the ChuChu found in Majora's Mask. They do not contain items and can be found in the Great Bay Temple. They are used during the temple by shooting them with Ice Arrows and then using as blocks to move around and use to climb up to higher places. Other than this, they are useless. Once defeated, they re-spawn after a small amount of time.

Blue ChuChus are an extremely rare form of ChuChu, with only 23 existing in the entire Great Sea. They have electricity running around the outside of their entire body, so hitting them directly is not a good idea. The best way to defeat them is to either use the Boomerang to stun it and defeat it with the sword, or to shoot an arrow, which defeats them instantly.

Alternatively, Link could swipe with his sword right after they pop out of the ground, before their electricity powers up. Although this method is a little risky for a new player, it is a useful speed running tactic.

A Blue ChuChu makes an appearance in the Temple of Droplets as the mini-boss of the dungeon. The battle goes exactly like the first battle with a Green ChuChu in the first dungeon, the Deepwood Shrine, with one exception: Like its The Wind Waker counterpart, it is covered in electricity, complicating the battle.

Blue ChuChus are considered the most annoying of ChuChus. They are covered with electricity, but unlike Yellow ChuChus, they never stop sparking. There is no way to damage them with the sword, so Link must use other weapons to defeat them. The Bow, the Boomerang, and the Hammer are all good options.

Donning a metallic look, this ChuChu is one of the hardest enemies to defeat in the game. Using a Whip to grab a "Fishsword", found frequently in the Ocean Temple, and launching it towards the Chu is an ideal way to defeat one. However, the easiest way is to use the Bow of Light, but this item isn't obtained until much later in the game. Be wary of this tough Chu.

This aquatic ChuChu can only be found underwater in the Ancient Cistern as well as flooded Faron Woods. They will hop onto Link's head and attempt to suffocate him until he shakes them off by using a Spin Attack.