From Zelda Dungeon Wiki
Jump to navigation Jump to search
Want an adless experience? Log in or Create an account.
Windblight Ganon 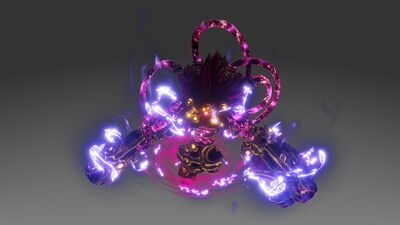 Windblight Ganon is a boss in Breath of the Wild and Age of Calamity. It was sent by Calamity Ganon to corrupt the Divine Beast Vah Medoh

Windblight Ganon killed Revali during the Great Calamity, taking control of Vah Medoh for Calamity Ganon, eventually serving as boss of the dungeon when Link came to free it of Ganon's control 100 years later. If Link doesn't fight Windblight Ganon inside of Vah Medoh, he will later encounter the boss in the Sanctum inside of Hyrule Castle, being the first Blight that Link faces there. He is also often considered one of the easiest bosses in the game.

In the EX Champion Revali's Song DLC quest, Windblight Ganon is fought again with limited equipment in the Illusory Realm. 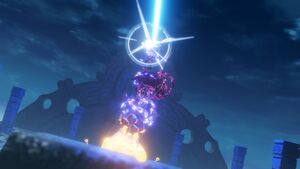 When Calamity Ganon awakens, it has each of the Blight Ganons attack the Divine Beasts. Revali is sealed inside Vah Medoh when he confronts Windblight Ganon and tries to shoot it with arrows, but he is constantly dodging the monster's laser shots and is eventually struck in the left wing, rendering him vulnerable as Windblight Ganon charges its cannons and aims at Revali, who could only watch helplessly. However, before it could finish him off, arrows burst out of the Gate of Time, created by Terrako, and strike at Windblight Ganon's arm throwing its focus away from Revali. Its assailant is revealed to be Teba, who came from the future to protect Revali, who managed to recover and return to the fight. Windblight Ganon is distracted by Teba and attempts to shoot at him, while Revali attempts to get some payback for the ambush, only for Windblight Ganon to block it. Link and his friends arrive in the nick of time through an updraft created by Vah Naboris. Unlike the other Blights, Windblight Ganon flees before it could truly be defeated. During the Divine Beast Vah Medoh battle to save Western Hyrule, Windblight Ganon reappears as a boss and makes one last attempt at taking Vah Medoh for itself and at not only at Revali's life, but Teba's as well, but Revali was ready for it, and thwarted this by humiliating it through slaying it with the weapon that it tried to take from him.

Later, Astor betrays the Yiga Clan by reaping the souls of the fallen footsoldiers to revive the Blight Ganons, including Windblight Ganon and he sends them after Master Kohga and Sooga. During the EX The Yiga Clan's Retreat, Windblight Ganon and the other Blights pursue them and eventually had them surrounded until Sooga uses a Yiga technique to immobilize them to allow Kohga to escape, albeit reluctantly on Kohga's part, as he was told to leave him behind to join the Hyrulean forces. It's unknown what happens to Sooga after this.

During the Each Step Like Thunder Scenario, Windblight Ganon appears with the other Blights as well as Astor and are ordered to kill Princess Zelda, though Link dared to fight them alone as Impa and Zelda makes a run for it, but the princess is unwilling to lose Link and runs back which was then that her dormant power had finally awakened, stunning the Blights and deactivating the Guardians within the vicinity. Windblight Ganon and its other elemental entities tried to hinder the progress of Purah and her friends when the Sheikah Science Director is trying to activate a failsafe and they are defeated again.

In The Future of Hyrule, Windblight Ganon and the other three Blights are the major enemies that are faced for the last time before they are all slain by the heroes for good before the confrontation with Astor, Harbinger Ganon, and eventually Calamity Ganon itself.