From Zelda Dungeon Wiki
Jump to navigation Jump to search
Want an adless experience? Log in or Create an account.
Vah Medoh 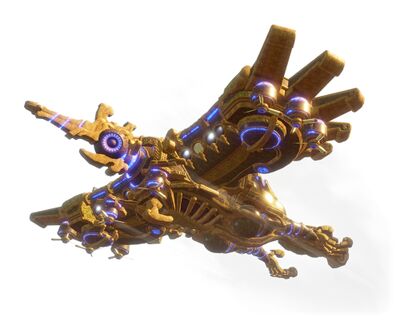 Vah Medoh is one of the Divine Beasts from Breath of the Wild and Hyrule Warriors: Age of Calamity. A Sheikah creation for use against Ganon, it was buried when technology was banned, and excavated 10,000 years later in the reign of King Rhoam Bosphoramus Hyrule.

In the Revali, the Rito Warrior Scenario, after the major mishap with the Rito during the journey to recruit their top warrior was cleared up, Revali, the latter accepts his call to become the pilot of the airborne Divine Beast Vah Medoh, though he remains skeptical of Link's chosen role of facing Ganon.

In the Freeing Korok Forest Scenario, Revali remains doubtful of Link and openly expresses this before he summons Divine Beast Vah Medoh to deal with the monsters besieging the forest. With the use of its laser cannons, barrier projection, and switching between top and bottom view to handle foes at any altitude, Revali is successful with destroying the monsters and rejoins the Champions.

In the Air and Lightning Scenario, after Calamity Ganon emerges, Revali flies to Vah Medoh to launch the counterstrike but he finds Windblight Ganon there and is sealed inside. Revali flew around and tries to get a shot in, but he is forced to dodge its lasers and one of them nicks his wing, throwing him off-balance as Windblight Ganon charges its lasers to dangerous levels at it prepares to shoot Revali's unprotected chest. Before Revali could meet his end, Terrako's Gate of Time opens, and arrows burst out of it to strike at Windblight Ganon's arms to break its focus, allowing Revali to recover, and the assailant reveals himself to be Teba. With Teba's support to Revali, Link and the rescue party have arrived to help them drive Windblight Ganon away. Continuing in this scenario, Revali and Teba join forces to help protect Western Hyrule from the unchecked forces and Windblight Ganon eventually returned with a vengeance and tries one last time to take Vah Medoh and kill both Rito warriors, but they managed to slay it with Vah Medoh.

In the Each Step Like Thunder Scenario, Revali uses Vah Medoh's lasers to break down enemy reinforcements with its lasers alongside Vah Ruta and Vah Rudania.

In the All Hyrule, United Scenario, Divine Beast Medoh appears one last time when Purah amplifies the Sheikah Towers to summon the armies all over Hyrule. Once the monsters that hold up the barrier with Princess Zelda's newfound power crippling it further, Revali opens fire with the other Champions to weaken Ganon.

Breath of the Wild Key Locations[edit][hide][show]
Retrieved from "https://www.zeldadungeon.net/wiki/index.php?title=Vah_Medoh&oldid=449867"
Categories: