From Zelda Dungeon Wiki
Jump to navigation Jump to search
Want an adless experience? Log in or Create an account.
EX The Yiga Clan's Retreat 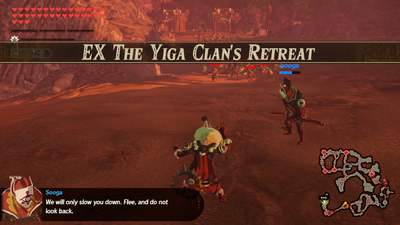 "Astor's betrayal dealt a devastating blow to the Yiga Clan. To flee from their pursuers, Master Kohga, Sooga, and their surviving allies engage in a life-or-death battle to retreat. "

Successfully use a Sheikah Rune counter against a Blight Ganon.

All allies start with low health and will be split up, so defeat all large enemies in your path as you make your way to the targeted position. After defeating the Malice Moblin, a Yiga Blademaster will stay behind and close the gate in the southeast. Defeating the two Ice Moblins in the outpost on the boardwalk section in the east will make three Hollows appear. Make your way back to the Yiga Blademaster in the southeast and the gate will open. Defeat the other Hollows and other large enemies as you continue towards the targeted position. Avoid Windblight Ganon and Thunderblight Ganon in the north.