From Zelda Dungeon Wiki
Jump to navigation Jump to search
Want an adless experience? Log in or Create an account.
Ice Moblin 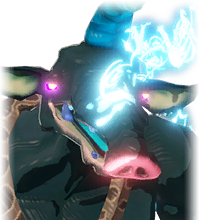 Ice Moblin from Age of Calamity

Ice Moblin are enemy variants Moblin from Age of Calamity.

Ice Moblins are Moblins that first appear in the Daruk, the Goron Hero or the Revali, the Rito Warrior scenario. They are ice-based enemies with a cloud of ice surrounding them. Upon attacking a warrior, they can freeze them momentarily, preventing them from attacking or moving for a few moments. Upon being defeated, they will drop Moblin parts, which may include a Moblin Horn, Moblin Fang, or Moblin Guts. The Moblin will also drop an ice orb, which could be used to replenish ammunition for the Ice Rod.

The Ice Moblin has natural weakness to the Fire Rod. Using a Fire Rod attack, this will crack the Ice Moblins energy gauge, making it easier for the warrior to deplete it quickly. After each Ice Moblin is defeated, the player will receive a Moblin Trophy, which can be used to complete quests or upgrade weapons of the various warriors.