This article is about the story scenario from Age of Calamity. For the character which it is named after, see Revali. 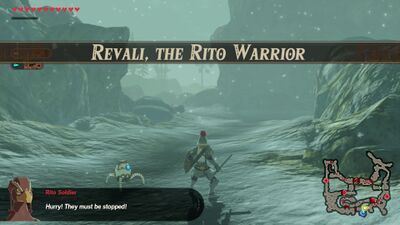 "Zelda and the party set out for Rito Village, hoping to recruit Revali as one of the Divine Beast pilots. As they cross the snowy plains, however, they are attacked by Rito."

Revali, the Rito Warrior is the third listed scenario of Age of Calamity Chapter 2, although the four main Chapter 2 scenarios can be completed in any order.

Unlike the other recruitment stages, the Champion being recruited is hostile, and there is no Divine Beast section.

"The Rito resided in a settlement on the Tabantha Frontier. These feathery folk were blessed with the ability to glide along the wind, and they were adept with bow and arrow."

"On the way to Rito Village, the party gets caught up in an intense snowstorm. Leaving Princess Zelda behind at a safe location, Link and the party set out to scout the area but quickly come into conflict with the Rito warriors led by Revali."

"Just as a fierce battle between Link and Revali is about to reach a violent conclusion, Princess Zelda intervenes. Both the snowstorm and the battle between the two warriors come to an abrupt end."

"Revali agrees to become a pilot for a Divine Beast but gets his feathers ruffled when he discovers that Link is the princess's knight. The little Guardian interjects, not in support of Link, but to assert that it is also a protector of the princess."