From Zelda Dungeon Wiki
Jump to navigation Jump to search
Want an adless experience? Log in or Create an account.
EX Guardian of Remembrance 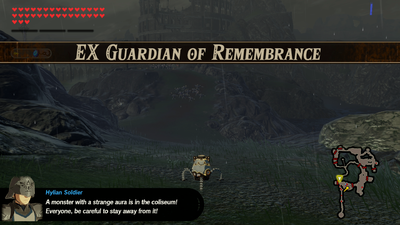 "The Guardian housing Ganon's Malice seeks to eliminate Zelda, the obstacle to its evil intentions. To save her, the time-traveling Guardian must face an enemy it has already fallen to, and whose fate is entwined with its own. "

Keep the health of Purah above 50%.

After collecting three of Terrako's traces, Robbie will go search for a hidden trace. He will make his way to the eastern side of the field in the southeast. Defeat the Malice Lynel and collect the hidden trace.