This article is about the story scenario from Age of Calamity. For the character which it is named after, see Daruk. 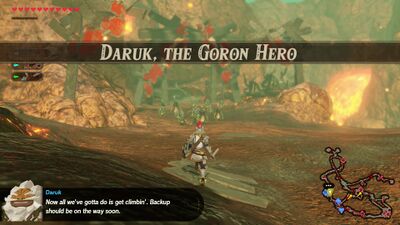 "Daruk happily accepts the role of Vah Rudania's pilot, but the Divine Beast is located on Death Mountain. With the mountain overrun with enemies, Daruk and the party must fight their way up."

Daruk, the Goron Hero is the second listed scenario of Age of Calamity Chapter 2, although the four main Chapter 2 scenarios can be completed in any order.

"The rugged Gorons lived in Goron City, a town carved into Death Mountain. They were forged in volcanic heat, their bodies as hard as stone."

"Daruk agrees to become the pilot of a Divine Beast, but it is revealed that a swarm of monsters has overrun Death Mountain, the location of Vah Rudania. Daruk makes for the mountain with the rest of the party in tow."

"The party somehow makes it to the peak of the mountain. Daruk, led by the small Guardian, climbs into Vah Rudania and engages the monsters swarming over Death Mountain in pitched battle."

"Daruk mops up the monsters swarming over Death Mountain then reaffirms his intention to pilot the Divine Beast. With words of thanks to Link and the party, Daruk hands over a treasured gift."