From Zelda Dungeon Wiki
(Redirected from Ice Chuchu)
Jump to navigation Jump to search
Want an adless experience? Log in or Create an account.
Ice ChuChu 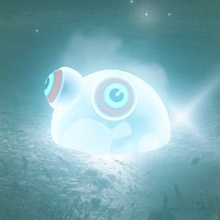 The Ice ChuChu is a variation of the regular ChuChu that appears in Spirit Tracks, Breath of the Wild and Age of Calamity.

Ice ChuChus are very similar to regular ChuChus, except they are light blue, and covered with ice that freezes Link whenever he attacks them directly. Therefore, Link must dispatch them with long range weapons. He can use the Boomerang to stun them. Once Link does this, the Ice ChuChu loses its freezing ability for a short time, and Link can attack it directly. Link can also shoot Ice ChuChus with the Bow or hit them several times with the Whip. Using the Whirlwind also stuns the Ice ChuChu.

These Chuchus make a reappearance in Breath of the Wild, having a similar look as the standard Chuchus, except coated with a white layer of ice. The Ice Chuchu comes in different sizes with a varying degree of health. The small variants have a health of just 3 HP, the medium-sized enemies have 20 HP, with the large Chuchu having 48 HP.

Upon death they will explode, which can temporarily freeze Link. Thus it best to attack the Ice Chuchu from a distance, using ranged weapons such as spears and arrows. If Link attacks an Ice Chuchu with a flame based melee weapon, or a Fire Arrow or Bomb Arrow, they will be defeated instantly. Ice Chuchu will always drop a White Chuchu Jelly as a reward.

They can be found in the frigid regions of Hyrule, such as the Hebra Mountains or Gerudo Highlands. They also appear in more localized peaks, such as Mount Hylia on the Great Plateau, Mount Lanayru, and the Crenel Hills. Occasionally, an Ice Wizzrobe will summon a small Ice Chuchu, and a Blizzrobe can summon a medium-sized Ice Chuchu.

Ice ChuChu first appear in the Revali, the Rito Warrior scenario. These weak enemies can be taken out with a single hit. When they are attacked, they will bloat up and explode, sending out an icy attack, capable of freezing a warrior that is nearby. They will occasionally drop White Chuchu Jelly as a reward when defeated. After each Ice ChuChu is defeated, the player will receive a Chuchu Trophy, which can be used to complete quests or upgrade weapons of the various warriors.