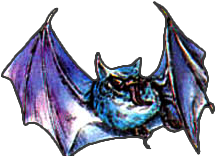 Ache artwork from The Adventure of Link

The Ache are bat-like enemies that appear in The Adventure of Link. Aches are bat-like creatures that are mostly found in caves, swooping down to attack whenever Link goes beneath them.[1][2] There are two variations of Ache.

Blue Ache are mostly found in caves or forests.[3] When Link is near, they dive down in an attempt to attack him before retreating to treetops or cave ceiling. They deal a small amount of damage and can be killed with a sword slash. Link gains 3 experience points for defeating The Blue Ache.

This purple variety of Ache can only be found in the Water Town of Saria and the Darunia. This Ache is called "Eyes of Ganon" by townsfolk because they can disguise themselves as ordinary villagers.[4] After Link talks to certain villagers of the town, they may transform back into their Ache form. While slightly weaker than their blue counterparts, they cause much more damage. Link gains 3 experience points for defeating one.

A single friendly Ache resides in the rafters of a house in the Town of Nabooru, which Link must jump to reach. At first, the Ache will refuse to speak, but if Link is persistent, the ache will give a clue about the location of the third Heart Container.[5]