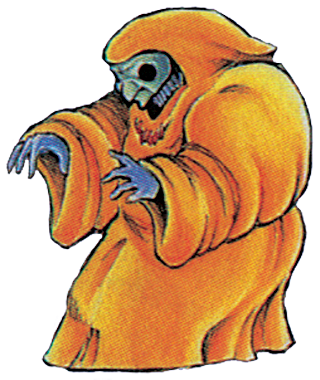 Artwork of Mago from the Futabasha Guide

Mago is an orange-cloaked magician with a skull-like face found exclusively in The Adventure of Link, where they appear as guardians of the Palace on the Sea. These spellcasters attack with fire spells and also quite adept at teleportation. Like Wizards, they will disappear and reappear constantly to a different location in the room. However, unlike Wizzrobes, they can be defeated using Link's sword.

While a Mago's fire is slow-moving and doesn't leave the ground, they are often encountered in groups or with other enemies, sometimes in tight quarters. They teleport away almost immediately after releasing their attack, so Link must anticipate where he thinks they will appear. While worth a substantial 200 experience points upon defeat, Magos are often more easily avoided than confronted.