From Zelda Dungeon Wiki
Jump to navigation Jump to search
Want an adless experience? Log in or Create an account.
Mountain Town of Darunia 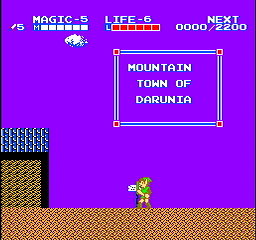 The Mountain Town of Darunia is a town found in northeast Hyrule amongst the mountains in The Adventure of Link. This village, like the Water Town of Saria, is infested with the Eyes of Ganon, meaning conversations with common villagers once again are potentially hazardous.

Speaking to a distressed woman, Link is told of a Kidnapped Child.[1] A successful rescue will earn him the Reflect Spell, a necessary tool in the Maze Island Palace. Link also learns of the presence of a Hylian Knight like the one he encountered in Mido.[2]

Conversing with other inhabitants of Darunia yields a fresh set of clues including a potential solution for the River Devil south of Nabooru,[3] and a secret passage within a palace.[4] Inspecting a table in one of the houses reveals the location of the Palace on the Sea.[5]

In front of the Wise Man's house, Link meets the mother of a kidnapped child, who has been hidden away in Maze Island. With the child returned safely, the grateful woman permits Link to see the Wise Man, who teaches him the Reflect Spell.

A boy informs Link that a powerful knight resides somewhere in Darunia. Inspecting the door of a nearby house reveals that someone is inside, but there is no way through.[6] Undeterred, Link makes his way along the rooftops with the aid of the Jump Spell and enters the home via the chimney. The knight found inside teaches him Jump Thrust.

This town is named after Darunia, a Sage in Ocarina of Time.[7]