From Zelda Dungeon Wiki
Jump to navigation Jump to search
Want an adless experience? Log in or Create an account.
Town of Ruto 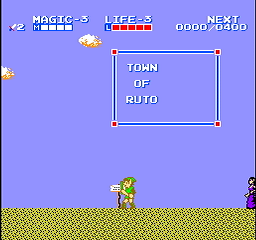 The Town of Ruto is one of the eight towns location in The Adventure of Link. It is located in Western Hyrule in a mountain valley northwest of the North Castle. After retrieving the stolen Trophy, Link gains access to the Wise Man who gives him the Jump Spell. Link is also relayed clues regarding the location of the first Magic Container[1] and the Hammer[2].

Unlike the Shield Spell, Link must complete a task before being able to see the Wise Man. The Niece of the Wise Man in front of the Wise Man's house indicates that a Goriya has stolen the town's Trophy and taken it to a cave in the Tantari Desert, east of Ruto[3]. Upon slaying the thief and returning with the artifact, Link is allowed to learn the spell[4].