From Zelda Dungeon Wiki
Jump to navigation Jump to search
Want an adless experience? Log in or Create an account.
Kasuto 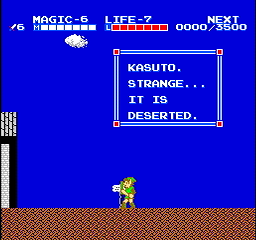 Kasuto is a location in The Adventure of Link. It is a town destroyed by the forces of Ganon and continues to be infested by invisible Moa that will remain an undetectable menace until Link returns from the Three-Eye Rock Palace with the Cross.

Despite the devastation, Kasuto is still home to one of the eight Wise Men. Should Link arrive in Kasuto before obtaining all four Magic Containers, the old man informs him that he should turn his attention east.[1] After returning with a full complement of Magic Containers, the elder bestows Link with the most powerful magical spell, Thunder.

Though the town is ruined and virtually deserted, it is not devoid of information. In one of the houses, Link learns of the existence of the Magic Key, presumably taken with the residents when they fled.[2]