This article is about the song as learned in-game. For the track from the Original Soundtrack, see Bolero of Fire (Ocarina of Time Soundtrack). 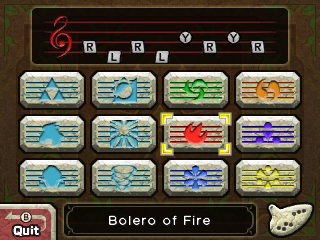 The Bolero of Fire is a teleporting song learned on the Ocarina of Time in Ocarina of Time. This song will teleport Link to the Triforce Pedestal outside the Fire Temple.

After Link has learned the Prelude of Light, he has the choice of going to either the Water Temple or the Fire Temple, but many do the Fire Temple first as it is easier to find and complete. As an adult, go back up Death Mountain to the Goron City. On one of the middle levels, Link will find a Goron rolling around. Throw a bomb at the right time to stop him. He will say that he is Darunia's son and that he was named after Link. He will then give Link the Goron Tunic and tell him to go to the Death Mountain Crater to find his dad, who has gone to defeat the dragon, Volvagia.

Go up to Death Mountain Crater, and Hookshot across the broken bridge. Here, Link will find Sheik, who in yet another cutscene, will teach him the Bolero of Fire.