From Zelda Dungeon Wiki
Jump to navigation Jump to search
Want an adless experience? Log in or Create an account.
Dr. Borville 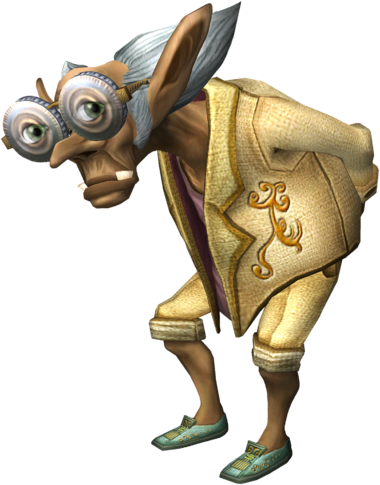 Dr. Borville is the only doctor located in Hyrule in Twilight Princess.[1] He is rude and arrogant,[2] and operates his practice in his Medical Clinic located in Castle Town on the Castle Town West Road. His Medical Clinic is the only noteworthy location on the west road. He allegedly prejudices against any patient that is not Hylian.[3] Even though he treated the ill Ilia, he refuses to treat Telma's next patient, the Zora Prince Ralis due to Zora being outside his field of expertise.[4] He is very snobbish and shifty, and only enjoys talking to wealthy people. If Link enters the Clinic and talks to Borville, the doctor automatically questions whether Link has enough money for an examination.[5][6]

Dr. Borville plays a part in the rather large Sky Cannon quest. He is first involved when Telma gives Link the Invoice and instructs him to bring it to the doctor.[7] Once Link shows Borville the Invoice, he explains to Link that he can't pay it off right now.[8] He starts to explain that if he still had the Wooden Statue that Ilia had, he would have been able to pay it.[9] He explains why he doesn't have it; he dropped medicine on it, which made it stink badly.[10] He says he had put it outside to dry, at which point it was stolen.[10][11] Using this information, Link can go to the back of the clinic and learn the Medicine Scent from a green spot on the wall, which was likely where Borville dropped the medicine. This scent leads Link to Louise, Telma's pet cat. Louise explains that she did steal the Wooden Statue,[12] but continues to say it was then stolen from her by some sort of skeletal dog beasts.[12]

Once Link has obtained the statue from the Stalhounds, he can show it to Dr. Borville, who exclaims that he doesn't have "the foggiest notion" of what it is,[13] even though he previously admitted to spilling medicine on it.[10]

During the ending credits, Dr. Borville can be seen within Telma's Bar.