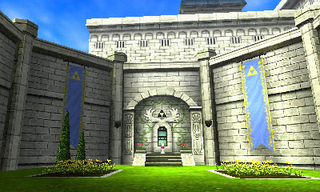 The Castle Courtyard is a location in Ocarina of Time.

Once Link has sneaked past the guards and entered the courtyard, he and Zelda introduce themselves. Zelda tells Link that she dreamed of dark clouds enshrouding the sky and a light shot out of the forest, and a figure followed by a fairy appeared, holding a stone.

Zelda then tells Link a story about the Golden Goddesses, who descended from the heavens and left behind the Triforce. Afterward, Zelda asks Link if he wants to look into the window, and if he agrees in doing so, he will see Ganondorf, who Zelda thinks is the one who will cause darkness to enshroud the land of Hyrule. Zelda gives her letter to Link as a decree to enter the Death Mountain Trail guarded by the guard in Kakariko Village. After talking to Zelda, Impa waits for Link to teach him Zelda's Lullaby.

Princess Zelda waits for Link to bring the other two Spiritual Stones to her. When Link is on the way to Hyrule Castle after collecting them, he sees Zelda escape with her guardian Impa from Hyrule Castle, followed by Ganondorf. Zelda then throws the Ocarina of Time in the moat and rides away. If Link takes it afterward, he will receive a vision from Zelda, who says that Link must play the Song of Time in front of the altar in the Temple of Time.

When Link has completed his quest and returned to a child, an ending cutscene will show Link meeting Zelda once again.