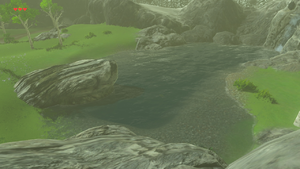 Purifier Lake is a location in Breath of the Wild.

The Purifier Lake is located at a lower elevation, just north of the Nirvata Plateau and southeast of the Lanayru Road - East Gate. It is a rather dangerous region, as it is home to a Red Hinox, as well as a Lynel, just north of the lake.

Within the Lake itself, despite it being rather small, you'll still find some Hyrule Bass and some Mighty Carp swimming around. Additionally there are some Sneaky River Snail that will occasionally appear.

Just to the east of the lake is the Naydra Snowfield, a much colder region that will require Cold Resistance. There are some Spicy Peppers around the lake to prepare Link for the pathway. Additionally, surround the lake there are some Hylian Shrooms, Silent Shrooms, Ironshrooms, and some Hearty Radish. 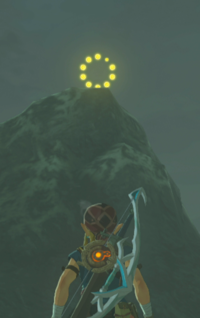 Stand on the leaf stump (located north and slightly east), and then race to the circle before time runs out. Cold Resistance Level 2 recommended.

Stand on the leaf stump (located north and slightly east), then quickly climb up to the circle before time runs out. Cold Resistance Level 2 is needed to prevent damage from temperatures in the area.