"This plateau is located to the east of Fort Hateno. It towers over Squabble River, which can be accessed from several holes that lead to the water. It is a natural two-story structure and a rare piece of terrain." 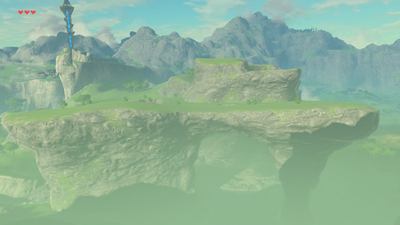 The Cliffs of Quince is a location found in Breath of the Wild.

The Cliffs of Quince are a geographic location found just northwest of the Hateno Tower and east of Fort Hateno. To the north, the Cliffs of Quince overhang the intersection between the Squabble River and the Fir River. The cliffs overlook Fort Hateno to the west, where the numerous inactive Guardians can be seen.

At the northwest side of the cliffs, there is a Magnesis puzzle, which results in Link finding a Korok. Additionally, just beneath the overhang to the north, there is a Bokoblin camp down below with Bomb Barrels found in the area. Once the enemies have all been defeated, a treasure chest will appear that contains an Opal gem. The Bokoblins here were cooking a meal and Link can find some Seared Steak.

At the peak of the cliffs on the plateau, there is a Stone Talus. He becomes activated after Link steps near the large rock on top of the cliff.

At the south and the east parts of the Cliffs, Link will encounter some Horses, some of which are wild, and others which are being used by Bokoblin archers. 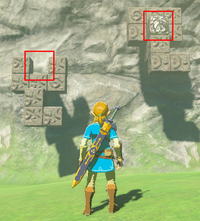 Solve the simple block puzzle for the seed.

Solve the block puzzle for the seed.