From Zelda Dungeon Wiki
Jump to navigation Jump to search
Want an adless experience? Log in or Create an account.
Herin Lake 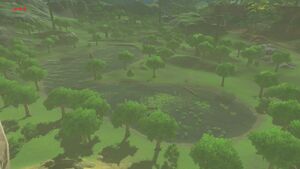 Herin Lake is a location found in Breath of the Wild.

The Herin Lake is located in the southeast portion of the Lake Tower region, east of the Highland Stable, and south of the Sarjon Bridge and Sarjon Woods. Despite it being a Lake, the water is very shallow where there is no fish-life that can survive and Link can just walk in it without swimming. At the west side of the lake, there is a treasure chest underneath a large block and it contains an Opal gem. A second treasure chets is found on a higher ledge, just southwest of the lake and it contains a Double Axe.

The main attraction at the lake is the large Blue Hinox that can be found sleeping just north of the Lake. When defeated, this Hinox will leave behind a Soldier's Claymore, Royal Broadsword, and a Royal Bow.

Surrounding the Lake, Link will encounter some wild Horses, as well as some Mountain Buck. Growing around the area are some Mighty Thistles and Hylian Shrooms. There are also some Acorns that can be found lying around. 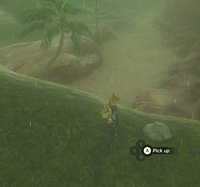 Lift up the small rock found on top of the ledge here.

This Korok's rock pattern is in the shape of a large spiral. On the second line from the outside is a missing rock, simply complete the pattern with the rock found nearby.