From Zelda Dungeon Wiki
Jump to navigation Jump to search
Want an adless experience? Log in or Create an account.
Vah Ruta 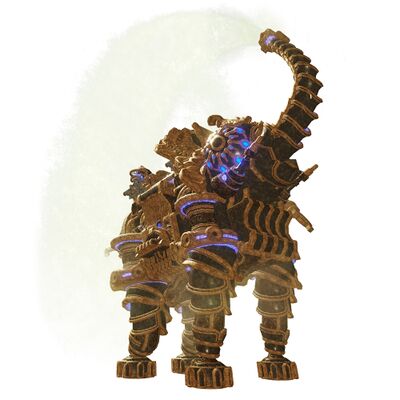 Vah Ruta is one of the Divine Beasts from Breath of the Wild and Hyrule Warriors: Age of Calamity. A Sheikah creation for use against Ganon, it was buried when technology was banned, and excavated 10,000 years later in the reign of King Rhoam Bosphoramus Hyrule. 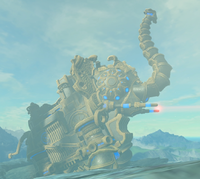 Princess Zelda offered the role of Zora Champion and pilot of Vah Ruta to Mipha. Though concerned about leaving the Zora and especially her younger brother, Sidon, she accepted when she was told it was in support of her love, Link.  Champion Mipha's Song

Sometime later, she sat talking to Link atop Vah Ruta, using her healing power on his wounds, and promised that she would always heal him no matter what.  Mipha's Touch

After Ganon re-emerged, Mipha was sent to Vah Ruta with the task of assisting Link  Return of Calamity Ganon , but Waterblight Ganon infected Vah Ruta with Malice and killed Mipha, trapping her spirit there for one hundred years.  Divine Beast Vah Ruta .

As time passed, the possessed Vah Ruta pumped out water from East Reservoir Lake, threatening to destroy its dams and destructively flood much of Hyrule. When King Dorephan sent the now grown Prince Sidon to find a Hylian who could use Shock Arrows to subdue the Divine Beast, he found the recently revived Link by Zora River. Though he did not recognize him, Dorephan did, and asked him to help Sidon stop the torrent of water.

With the beast under her control again, Mipha took Vah Ruta to a peak between Ruto Mountain & the Zodobon Highlands and locked onto Hyrule Castle. When Link confronted Calamity Ganon there, she fired, costing the Calamity one-eighth of its maximum health.

After the final defeat of Dark Beast Ganon, Zelda noted on the Sheikah Slate that Vah Ruta had mysteriously stopped working and decided to go with Link to investigate what was wrong.

In the Mipha, the Zora Princess Scenario, as the war spilled across Hyrule, Zelda asks King Dorephan as a plea to control the Divine Beast to help fight off the invaders but after a serious assault on Zora's Domain had tipped gravely into the monsters' favor; Guardian awakens Vah Ruta from slumber and Mipha agrees to take command of the mighty machine to root out the enemy from their home.

Using the behemoth's Ice Barrage, trunk and laser, Mipha guides the titan through a valley choked with enemies and obstacles where only the Moblins, Wizzrobes and Lynels threw their attacks in a bid to stop the machine's route of destruction. After Rito finally eliminates much of the enemy advance, the Domain is liberated and the Zoras, and their King, were convinced. If it weren't for Mipha's help that they would have not survived the siege and thus have agreed to allow to permit the Zora Princess to command Vah Ruta in the fight against their foes, on the condition that she returns unscathed.

In the Water and Fire Scenario, when Calamity Ganon emerges, Mipha immediately went into Vah Ruta to launch a counterattack, but she finds Waterblight Ganon upon arrival and is imprisoned inside. Despite putting up a fight, Mipha is left at its mercy when the water around her is frozen and was about to face her end when Waterblight Ganon hurls its ice flail and Cryonic formations at her. However, Terrako's Gate of Time arrives, and an older Sidon appears and blocks the attacks before they can strike his sister. Because of Sidon's support, Mipha lived long enough for help to arrive and is able to slay Waterblight Ganon before it could kill either Mipha or Sidon, thus sparing Vah Ruta from being taken over by the water-based creature. As Mipha is exhausted and there's no further danger, Sidon joins the group to lead the way to help Daruk and Yunobo retain their control over Vah Rudania, and the defeat of an Igneo Talus allows Mipha to use Vah Ruta's trunk to spray water over the river of lava blocking the way.

In the Relentless as a Waterfall Scenario, Vah Ruta is used again with Mipha and Sidon controlling it together as they make their way to Akkala Citadel. Upon arrival, they managed to protect the party from an infected Guardian and Mipha leaves Vah Ruta to help the Hylian knights with their wounds while Sidon takes over control to help keep the worst of the forces at bay until backup from Daruk and Yunobo arrive.

In the Each Step Like Thunder Scenario, vah Ruta appears again, spraying water over the enemies to wash them away and drown them to help Urbosa and Riju alongside Vah Rudania and Vah Medoh.

In the All Hyrule, United Scenario, Vah Ruta appears one more time when Purah restores power to the Sheikah Towers to summon armies from all over Hyrule. Once the monsters that hold up the barrier around Hyrule Castle are destroyed and the barrier further crippled by Princess Zelda's power, Mipha opens fire with the other Champions to weaken Ganon.

Breath of the Wild Key Locations[edit][hide][show]
Retrieved from "https://www.zeldadungeon.net/wiki/index.php?title=Vah_Ruta&oldid=442421"
Categories: