Lanayru (Breath of the Wild)

"Lanayru is located in the eastern part of Hyrule. The region is blessed with ample rainfall and sources of water. Both the Rutala River, which flows from East Reservoir Lake, and the Zora River, which runs from Zora's Domain, feed into the Lanayru Wetlands. The Lanayru Great Spring area contains the source of all Hyrule's fresh water, as well as Lanayru Bay, which extends from southern portion of Zora's Domain. The Zora came to this land seeking pure, abundant water and have made their home here." 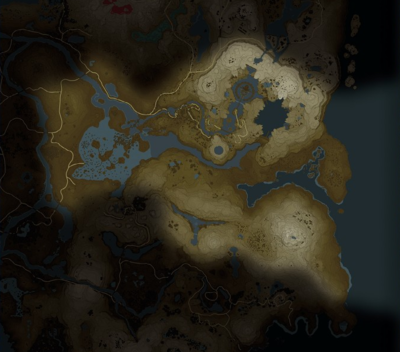 Map from Creating a Champion p273

The Lanyaru province is mountainous, and it has many lakes and waterfalls. It is located in the east of Hyrule. Its neighboring provinces are Necluda to the South, Central Hyrule to the west, Eldin to the northwest, and Akkala to the north. In the middle of Lanayru resides Zora's Domain, the home of King Dorephan and Prince Sidon. Due to the ruggedness of the mountains and the presence of overhanging peaks, it may prove difficult and time-consuming to mine Ore Deposits in Lanayru.

Due to the influence of the Divine Beast Vah Ruta, Lanayru has been plagued with constant rain for some time, though the province is naturally rainy, even after the Divine Beast is subdued.

The peaks surrounding the Zora's Domain and the road leading to it are crystalline in nature and have shades of blue. Some of this bluish stone, as well as Luminous Stone, are used in the Zora architecture.

Though scalable, the mountains of Lanayru are taller than they are wide, and the availability of the Zora Armor, which makes swimming up waterfalls a fast alternative, makes scaling the mountains counterproductive.

The Wetlands to the west may well be the first feature of the Lanayru Province that the player encounters, and it has a wooden causeway that connects the various small islands. Also, it may also be among the first areas that would feature Lizalfos, the most common monster in the province, extending its range to the outer fringes of Zora's Domain.

Most of the lakes in the Domain and the Zora River present heavy currents, making swimming an arduous task, even while wearing the Zora Set.