From Zelda Dungeon Wiki
Jump to navigation Jump to search
Want an adless experience? Log in or Create an account.
Lakeside Stable 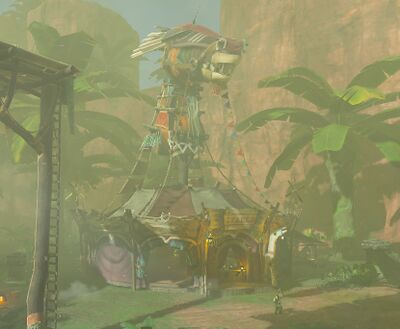 The Lakeside Stable is a stable in Breath of the Wild and Age of Calamity.

The Lakeside Stable It is located in the Faron province, and can be found off the road just west of Floria Bridge and Lake Floria, below the cliffs of Ubota Point. It is staffed by Anly, who manages lending and boarding horses, where as Cima takes care of the horses. The vendor Beedle can be found wandering the road before the Lakeside Stable, selling arrows and elixir ingredients.

Local resources include Ironshrooms, Razorshrooms, Mighty Bananas, and the occasional Hyrule Herb. Crates stacked behind the stable contain a variety of fruits. Local animal life varies, but typically the Hightail Lizard, Blue-Winged Herons, and Water Buffalo are found wandering nearby. Farosh travels over Lake Floria early morning and late in the day, causing windy up-drafts that will help lift Link into the air.

A Wooden Shield and Traveler's Bow can also be found around the Lakeside Stable, along with a Torch. A Cooking Pot is also available for Link to use for cooking.

As with most stables, there is a local dog in the area. If Link spends some time with the dog and feeds him some food, the dog will lead Link out towards a treasure chest buried in the ground, just northwest of the stable. This chest contains a Forest Dweller's Spear.

Energizing Apple Pie: Instantly refills some of your Stamina Wheel. The crispy, flaky pie crust and sweet apples are a match made in heaven.

The Energizing Apple Pie restores seven hearts and 2/5 of a stamina wheel.

Traysi here, bringing you the latest news and gossip from morning to night!

A loooong time ago, there was a skilled hunter. On the way back from a hunt, he saw a light moving in the darkness. Without hesitation, he fired an arrow toward it, and where it had been he found a bunch of rupees. From that day forward, whenever he saw a similar light, he would fire an arrow at it. He always found rupees where his target had been, and he grew quite rich.

I bet you think this is just a myth, right? Then what do you say about all the people who claim to have seen a glowing blue bunny in the forest lately?

You probably say, "Oh, Traysi, thank you for writing volum 6!" Sound about right?

You should say that, because the blue bunny is the light the hunter saw! Finding it means finding lots and lots of rupees! I can't endorse this bit of gossip enough!

Wait, I don't know how to use a bow and arrow... That really puts a damper on things. 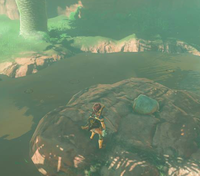 Lift the rock on the small island at the center of the poisonous bog.

On top of Ubota Point, directly west of the stable, there is a poisonous bog with a small island in the middle. Get to the middle using the Cryonis Rune and lift up the rock in the center. 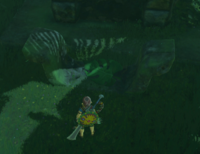 On the topmost, westernmost cliff of Ubota Point, find the giant statue and offer a Hearty Durian or Mighty Bananas. If you don't have one, you can find one on trees nearby. 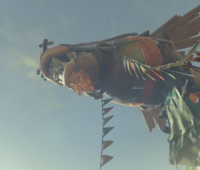 Burn the goatee made out of leaves of the Horse structure above the stables.

You can find this seed by igniting the pile of leaves underneath the horse's chin at the stable with fire arrows. (There is a Cooking Pot nearby you can light your arrows with if you don't have any fire arrows.) 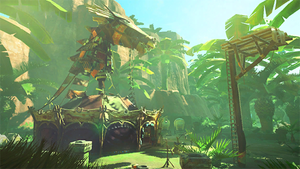 Lakeside Stable as it appears in Age of Calamity

In Hyrule Warriors: Age of Calamity, this stable becomes available after completing the Road to the Ancient Lab scenario in Chapter 1, and is unlocked by providing 5 Armored Porgies, 5 Hyrule Bass, and 10 Chuchu Trophies to complete the On the Hook quest. It periodically hosts merchants who buy and sell materials.