"This plateau provides a spectacular view of the entire forest. You can gaze down into Lake Floria and marvel at the massive waterfall that feeds into it. Mighty Banana trees also grow here in clusters. Ubota Point is well worth the stop to rest and recover before once again venturing out on an arduous journey." 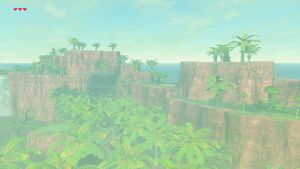 The Ubota Point is a location found in Breath of the Wild.

Ubota Point is a higher elevation region, located just south of the Lakeside Stable. It contains the Shai Utoh Shrine and wraps around the Rassla Lake. The area looks over Martha's Landing to the southwest and Aris Beach to the southeast.

On the high elevation at the west end of the Ubota Point there is a large statue and if Link offers a Hearty Durian, a Korok will appear. Just east of here and directly west of the Lakeside Stable, there is a small pond filled with poisonous bog. Lift the rock in the center to find a Korok.

A second Bokoblin camp can be found just east of the highest portion of the Ubota Point. Here there are some more Red, Blue, and Black Bokoblin, as well as a very dangerous Black Lizalfos archer who wields Bomb Arrows. There is a treasure chest here that contains a Topaz gem. Another treasure chest can be found just to the south of the highest portion of the Ubota Point. This chest is protected by some Blue Lizalfos and Electric Chuchus. The treasure chest here contains five Bomb Arrows.

Another Bokoblin camp can be found at the higher elevation, just southwest of the Rassla Lake. There are some more Black Bokoblin here that are guardian a treasure chest which contains a Soldier's Claymore. Just northwest of here, there is a small rock that can be lifted to find a Korok Seed. Another Korok Seed can be found directly west of the Rassla Lake. Offer a Mighty Bananas to the statue to get the Korok.

At the far east end of Ubota Point, the area becomes a flat plateau and there are two circular rock patterns. Grab the rock in the middle and complete the other circle to get a Korok seed.

Throughout the area there are several small ponds and within them, there are some Hyrule Bass and Hearty Bass that can be caught.

Pick up the stone on the small ledge. 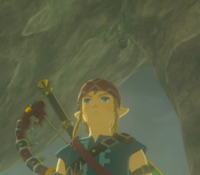 From the ground below, look up into the overhanging rock and shoot the lone balloon.

Shoot the balloon in the rock tunnel.