This article is about the material found in Hyrule Warriors. For the object seen on Death Mountain, see Boulder. 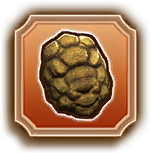 Rock is a common (bronze) material found in Hyrule Warriors. It is dropped at a high rate upon defeating a Goron.

As the rock is only dropped by Gorons, it can only be found in a few places. The warriors often fight alongside Gorons but rarely against them. The only stages in Legend/Free Play Mode where they are fought is on Death Mountain and the second visit to Hyrule Field. If the Master Quest DLC is downloaded, one can also fight them in the Eldin Caves and the beginning of Hyrule Field.

It is used to create badges in the Badge Market and mixtures in the Apothecary. Badges that the material creates varies based on the character being upgraded.