From Zelda Dungeon Wiki
Jump to navigation Jump to search
Want an adless experience? Log in or Create an account.
To Mount Lanayru 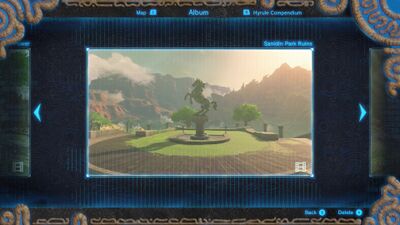 To Mount Lanayru is one of the Recovered Memories found in Breath of the Wild.

After Link has completed the Locked Mementos by talking to Impa, this will begin the Captured Memories main quest. To Mount Lanayru is one of the twelve pictures that are loaded in the Sheikah Slate.

Pikango at the Outskirt Stable will recognize the location that is shown in the picture. The horse statue can be found at the Sanidin Park Ruins, located just northwest of the stable, along the Safula Hill.[1] The location of the memory is immediately in front of the horse statue.

Zelda and Link are riding horses side by side, her riding the White Horse and Link riding his personal horse. Zelda states that she has heeded to Link's advice regarding horse riding, and while she was hesitant about equipping her horse with the Royal Bridle and Saddle because she felt that the horse may not have earned it, she states that she eventually did, as she's trying to be more empathetic.

Upon reaching the monument in the late afternoon, Zelda and Link stare eastward at the horizon at Mount Lanayru, which she states that it takes its name from the Goddess of Wisdom. Zelda further elaborates on the fact that the requirement for access to the mountain is to be seventeen years old, and having prayed at the Spring of Courage and the Spring of Power for awakening of her powers to no avail, much to her doubts, the Spring of Wisdom is the last opportunity she has to do so and that change may happen. As the following day she turns seventeen, she turns to Link with a pained look and professes her intention to make her way up the mountain.

Breath of the Wild Recovered Memories[edit][hide][show]
Retrieved from "https://www.zeldadungeon.net/wiki/index.php?title=To_Mount_Lanayru&oldid=377799"
Category: