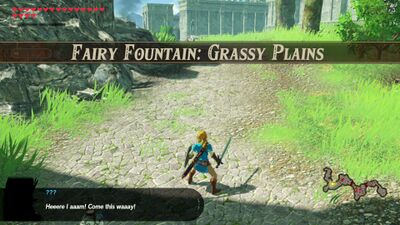 "The party has traveled to Hyrule Field in search of a Great Fairy. When they arrive, however, they spot the silhouette of an uninvited guest..."

Fairy Fountain: Grassy Plains is a challenge scenario of Hyrule Warriors: Age of Calamity, unlocked by completing the Offering Help on the Road quest. It is one of the three initial challenges in the Trial of the Great Fairies. Completion of all three unlocks the final challenge in the series, Fairy Fountain: Battlefield.

The player's character must fight their way across Hyrule Field in less than seven minutes to meet, and then defeat, the Great Fairy Cotera.