From Zelda Dungeon Wiki
Jump to navigation Jump to search
Want an adless experience? Log in or Create an account.
Explosive—Handle With Care 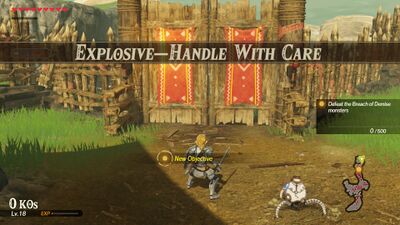 "Monsters have appeared near the Breach of Demise. There are bomb barrels nearby—meant for mining—but they'd probably be effective against monsters too..."

Explosive—Handle With Care is the third challenge scenario of Hyrule Warriors: Age of Calamity, unlocked by completing Mastering Remote Bombs. It is the final Challenge available in the free demo version.