Swift Spear of the Zora

From Zelda Dungeon Wiki
Jump to navigation Jump to search
Want an adless experience? Log in or Create an account.
Swift Spear of the Zora 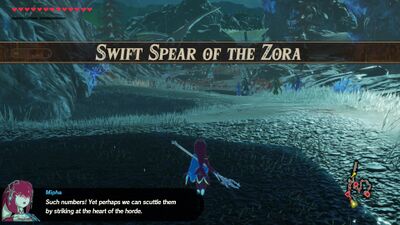 "A horded of monsters is encroaching on Zora's Domain. Mipha leaps into the middle of the battle and brings the fight to the enemy!"

Swift Spear of the Zora is a challenge scenario of Hyrule Warriors: Age of Calamity, unlocked by completing The Road Home, Besieged. Play as Mipha and reached the targeted position within the allocated 4-minutes. Mipha will battle through two Outposts, the first has a large Bokoblin, with the next having a Moblin. Once Mipha reaches the destination, the timer will stop, but she will need to defeat the four Moblins.