Tough Bulwark of the Gorons

From Zelda Dungeon Wiki
Jump to navigation Jump to search
Want an adless experience? Log in or Create an account.
Tough Bulwark of the Gorons 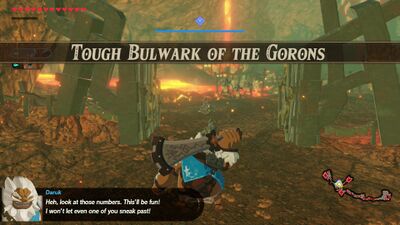 "A swarm of monsters has appeared on the outskirts of Goron City. Daruk, confident in his abilities, takes up arms to fight on behalf of all the Gorons."

Tough Bulwark of the Gorons is a challenge scenario of Hyrule Warriors: Age of Calamity, unlocked by completing The Road Home, Besieged. Play as Daruk, alongside any other warrior and capture the four outposts. Enemies will appear and try to take the allied stronghold. It is a good idea to keep one ally near the allied base, while the other attacks the various outposts. The outposts have a large Lizalfos, a Fire-Breath Lizalfos, a Blue Lizalfos, and Fire Moblins.