From Zelda Dungeon Wiki
Jump to navigation Jump to search
Want an adless experience? Log in or Create an account.
Daily Drills: Rito 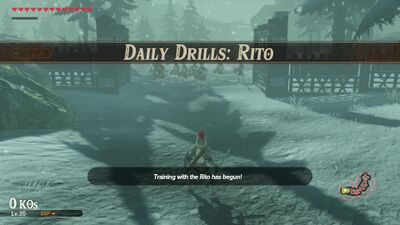 "Today's assignment is joint training exercises with Rito forces. Spar with the soldiers that are heading your way."

Daily Drills: Rito is a challenge scenario of Hyrule Warriors: Age of Calamity, unlocked by completing The Yiga Clan Attacks!. Play as any warrior, other than Revali, and fight off the Rito Soldiers. The player will need to defeat one Rito Captain in order to unlock a gate that is closed, and two more to open another. When the targeted position is reached, Revali will need to be defeated in order to complete the challenge. Completing this challenge will unlock the Cross the Hebra Mountains challenge.