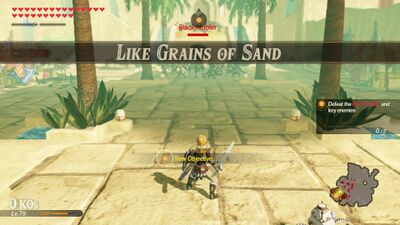 "A horded of monsters has appeared in the Gerudo Desert. Restore peace to the desert by defeating all of the monsters."

Like Grains of Sand is a challenge scenario of Hyrule Warriors: Age of Calamity, unlocked by completing the Relentless as a Waterfall scenario.

The battle begins inside of Gerudo Town and the warrior will need to defeat the two Black Moblins. Two Electric Moblins will appear, and then another Black Moblin. A sixth, Fire Moblin will then appear. When all the Moblins have been defeated, a pair of Guardians will appear, followed by a Guardian Skywatcher. When all three Guardians are defeated, a Molduga will then appear. Defeat the Molduga to complete the challenge.

Completing this challenge will unlock the Lost Treasures challenge.